As vaccination totals rise, restrictions finally begin to ease across the country

Are you ready for some sunshine?

One day nor’easter is fading away throughout Friday

VALDOSTA, Ga. – The family of Jaguars linebacker Telvin Smith gathered Friday evening to remember his 25-year-old brother, Brian Moore, who was shot to death earlier this week in south Georgia.

Friends and family held a vigil at Moore's home on Knox Drive in Valdosta where police say he was shot to death shortly before 10 p.m. Sunday. Valdosta police said evidence indicates the shooting was an isolated incident and not random.

"I'm really happy for Brian's friends who came out tonight to show they really love him. Not everyone is evil," said Luci Smith, Moore's mother.

Moore's parents described their son as a peaceful and genuine man who loved motorcycles, music and football.

"I couldn't understand it. You see his smile before you see his body and he lit up the room," said Wayne Wright, Moore's father. "Sometimes, people want to steal the light and I guess that was the case."

The family said Moore was a football standout and got a scholarship at the University of North Carolina. Smith, who was drafted in the fifth round by the Jaguars in 2014, played college football at Florida State University and attended high school in Valdosta.

Smith missed several practices while on a leave of absence follow his brother's death, but he reported back to the team on Friday. Jaguars head coach Gus Bradley said Smith will join the team Saturday evening in Detroit ahead of the team's game against the Lions.

Adding to his emotional week, Smith's girlfriend gave birth to their son this week, two days after his brother's death.

Rakeisha Smith said her brother won't let Moore's death affect him mentally on the field and will use the tragedy as strength to move forward.

"He's hurt. He's crushed. But we keep checking on him and letting him know that everything is going to be all right," Rakeisha Smith said. "He knows Brian would want him to keep going and make it to the top."

As Moore's loved ones lit candles and released balloons in his memory Friday night, they remembered him as a victor, not a victim.

"He always had a huge smile on his face and he would give anyone the shirt off his back. He was a kindhearted person," Rakeisha Smith said.

"You got someone who lost their life in a senseless way. This goes deeper than just this neighborhood. This is throughout the entire country where you have a lot of folks who think the way to get things is to take it," said Albert Barner, Moore's uncle.

Police said they have identified persons of interest in the killing, but have not named a suspect. Anyone with any information about the killing is asked to call the Valdosta police at 229-242-2606.

"That's the only way this can be solved, if people step forward," Wright said. "We can only stick together and be together."

Moore's funeral will be held at 2 p.m. Saturday at Christian Love Ministries at 526 Griffin Avenue in Valdosta. 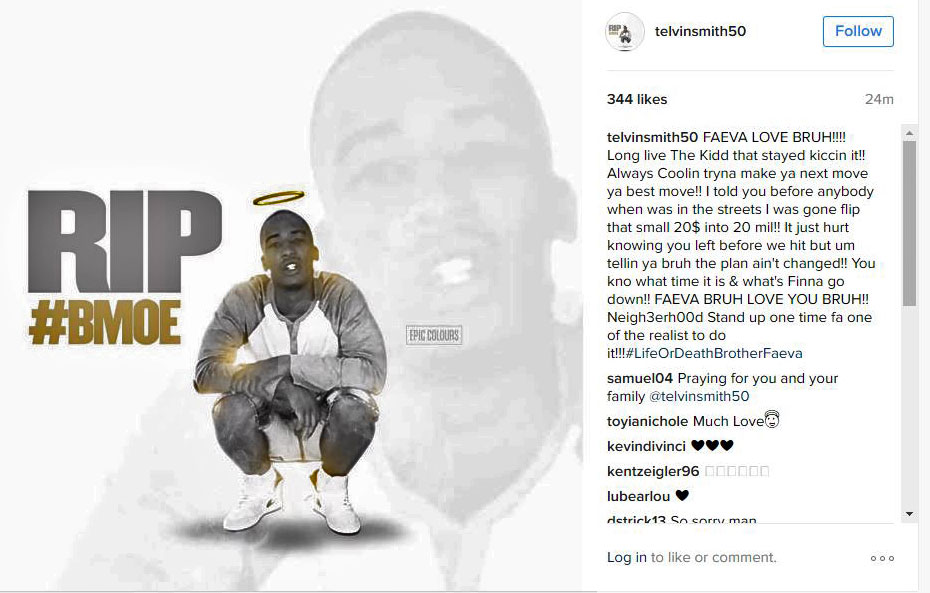