Floridians urged to be cautious, aware of potential scams in wake of Ian’s destruction

Points along the St. Marys and Sante Fe rivers will rise through weekend

Now, people in a Macclenny neighborhood off Steel Bridge Road are forced to ditch their cars in favor of alternative transportation.

One woman told News4Jax she has to use a jet ski in order to make it home every day.

“People say things like I’ve had a rough day at work, they don’t know the half of it,” Sandra Johns said.

Johns has a longer commute than most after her workday.

“I put on my life vest, put on my backpack and away I go,” Johns said.

She has to park her car at the entrance of her neighborhood and then take the jet ski for a mile to her home.

Johns said the last time it flooded this bad in her area was four years ago.

Johns lives in a neighborhood that backs up to the St. Mary’s River in Baker County.

According to the National Weather Service, the river was at 11.2 feet on Tuesday with minimal flooding.

After the storm, it’s sitting at 17.2 feet just north of Macclenny. Flood stage is 12 feet.

“It takes longer to drain out than it does to come in,” she said. “Might take two weeks to get out.”

Johns said her home has not suffered any flood damage but the neighborhood is underwater.

She’s not the only one in the area using a watercraft to get around. John Orfield is using his boat to get down the street.

“It’s a different world out here when it floods,” he said.

Flood warnings are out for Alachua, Baker, Charlton, Columbia, Nassau and Union counties.

Several points along the Santa Fe River report flooding, with the highest point near High Springs -- on the border of Alachua and Columbia counties -- where the river is 4 feet over flood stage and still rising.

Downriver near Fort White, the Sante Fe River is expected to continue to rise, reaching the major flooding threshold by Sunday. Many roads in the area will be impassable and some homes will be surrounded by water. 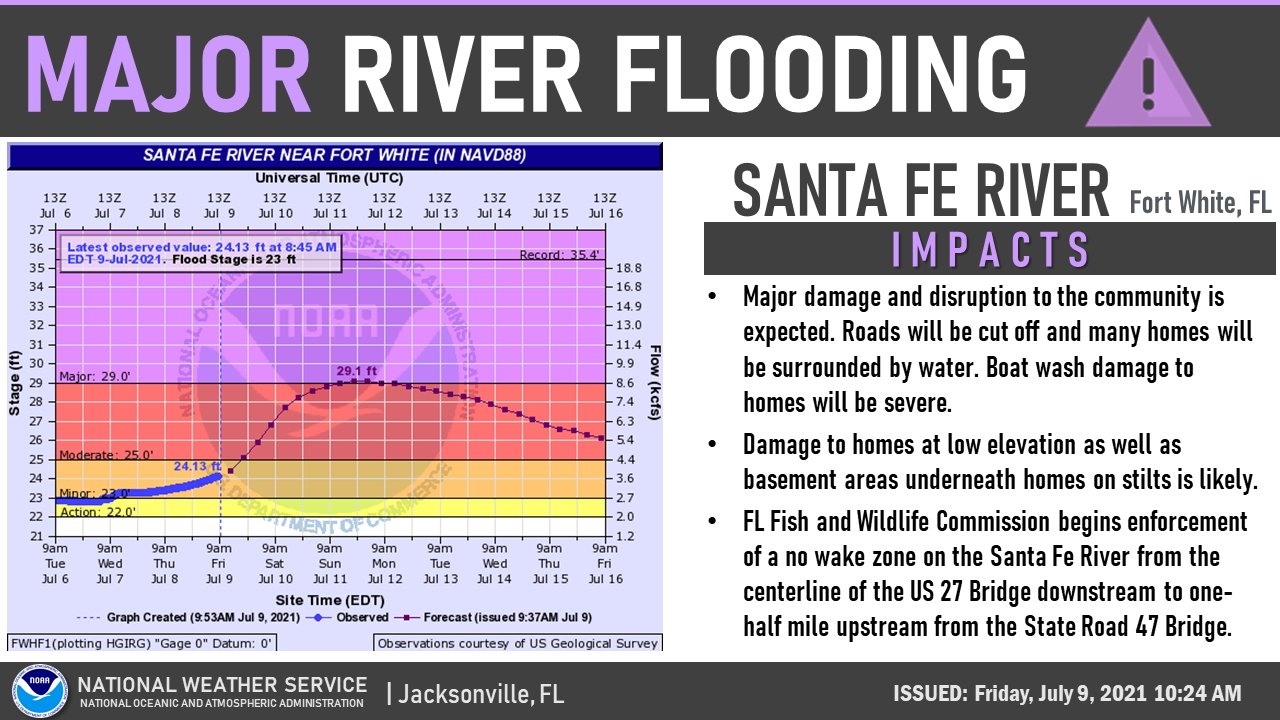 “In certain areas, it could be but again because of how wet it is it could be a factor and in particular down along the river areas,” said Columbia County Director of Emergency Management, Shayne Morgan told WJCB-TV in Gainesville. “Those areas are extremely wet and the rivers are higher than they have been so that’s also something we have to keep an eye on.”

Black Creek, which rose to 17.1 feet on Thursday -- a foot over flood stage -- had dropped nearly 2 feet by Friday morning and was expected to continue falling.

George Lomax, who has lived on the Santa Fe for 36 years, said this year is the first time he’s noticed the river at a high level before a storm.

“Because I’ve been through it before, I know what has to be moved,” Lomax told WCJB. “I always tell myself I shouldn’t have put that there because having to pick it back up again. It’s worth it. It’s worth it to live I mean look at this place.”

While Lomax said he can handle the river rising, flooded roads are still something to look out for in the area.