More rain on the way today, Drier days to follow

'Mountain of evidence' or 'reasonable doubt' against Katrina, Reggie Brown

JACKSONVILLE, Fla. – After more than a week of testimony, prosecutors, a defense attorney and one of the defendants made their cases to the jury, arguing whether or not two former Jacksonville City Council members skimmed money for personal use from government grants and loans given to a barbecue sauce startup in Northwest Jacksonville.

Katrina Brown and Reggie Brown both rested their case on Monday. They are not related.

Katrina Brown, who is representing herself, said she was feeling confident as she entered the courtroom Tuesday, saying, "The government has not met the burden of proof."

Assistant U.S. Attorney Michael Coolican told the jury the barbecue sauce business that received nearly $3 million in a government-backed loan and a city grant existed only on paper and reminded the jury of checks shown during the trial, showing money moved around between various related business accounts transactions.

"There's no explanation for moving money around like that except for participation in a criminal conspiracy," Coolican said. "That's what money laundering looks like."

Katrina Brown's closing argument began with her asking the jury to see the inconsistencies in the government's case and the lack of proof provided during the trial. She said the government said there was a conspiracy, but they can't show where misdirected money was spent -- no lavish trips or cars.

She said the bank handling the SBA loan told her she could have paid herself $60,000 a year, but she "never took a dime because she wanted the business to work."

She said the IRS could have lost the tax records they claim were never filed and said the summary of bank account activity prosecutors used was "an illusion."

Thomas Bell, Reggie Brown's attorney, gave the second defense closing argument, saying there's no evidence that his client knew any money was fraudulently obtained. Bell said Reggie Brown decided not to testify in his own defense due to the lack of evidence tying him to the conspiracy.

"There is absolutely no explicit evidence that Katrina Brown approached Reggie Brown and said, ‘Listen, I need some help. I need to keep the money train moving,'" Bell said.

In his rebuttal closing argument, Assistant U.S. Attorney Tysen Duva said there is not a mountain of evidence against Reggie Brown as there is against Katrina Brown, but the government has proven its case beyond a reasonable doubt.

"Reginald Brown would have you believe that he didn't know what was going on -- and it's just not credible," Duva said.

The jury began deliberating the 38 counts of fraud, conspiracy and money laundering against the two Browns about 3 p.m. Tuesday. About 5:30 p.m., court was adjourned for the day, and deliberations resumed Wednesday morning.

On Monday, Jerome Brown, the namesake of the barbecue sauce business at the center of the lawsuit, took the stand for the defense. He talked about losing hundreds of dollars on sales after getting a contract with Sam's Club.

Katrina Brown on Monday introduced bank records showing Jerome Brown and his wife paid thousands of dollars of their own money to help pay for expenses during the manufacturing process of the sauce.

Reggie Brown's attorney rested without calling any witnesses, despite his lawyer saying in his opening statement last week that the jury would hear from his client.

"I don't believe the government has proved its position," Reggie Brown said while leaving court on Monday. "They did not have a lot to say about me. Outside of activity of me doing business, but I still contend that that was a legitimate business." 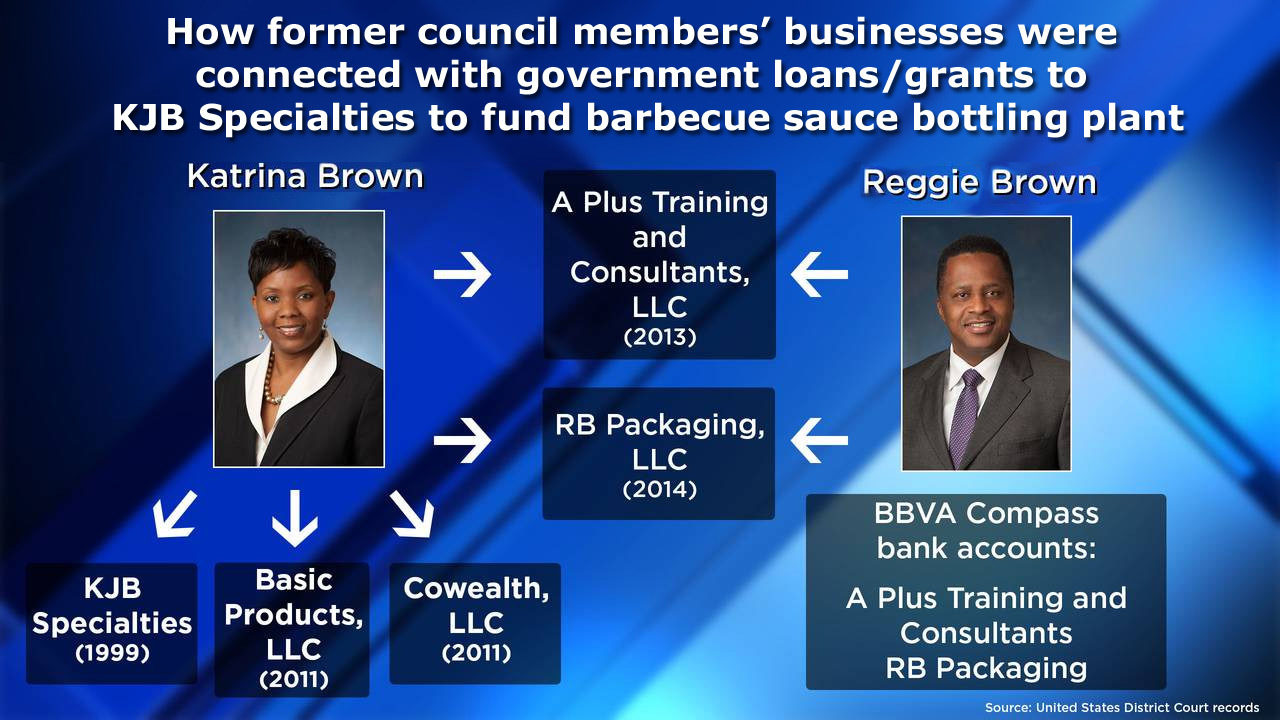 During three days of testimony, a parade of prosecution witnesses tried to demonstrate how money flowed from the bank dispensing money from a $2.65 million Small Business Administration-backed loan to the sauce plant named KB Specialties and how that money was disbursed to businesses owned or controlled by the two defendants.

An FBI forensic accountant testified that money from the grants and loans was used for what appeared to be personal expenses, including purchases at restaurants, department stores, movie theaters and a Best Buy, and for paying the rent on Katrina Brown's apartment.

The accountant, Kyle Stevens, summarized deposits, debits and checks written by the businesses involved in the barbecue business and related companies. He testified that $141,500 of $272,000 that went into the bank account of RB Packaging -- a business owned by Reggie Brown -- was dispensed in checks to Basic Products LLC, a barbecue sauce business owned by fellow council member Katrina Brown's family.

Reggie Brown's attorney pointed out during cross-examination that several of the checks had "For Deposit Only" or "RB Packaging LLC" on the back rather than Reggie Brown's signature.

The final prosecution witness testified that Reggie Brown never filed taxes in 2014, even though he was paid by the city and by one of the companies he owned, which took in thousands of dollars from an SBA loan. KB Specialties also did not file taxes that year.