Excitement brewing at Baldwin ahead of matchup against Yulee

JSO: Pig on the loose in New Town neighborhood

This fingerprint keypad can make keys a thing of the past

The University of Florida has found 24 students carrying the mumps virus since May 3, and the university and the Alachua County Health Department are asking people to take proper precautions.

UF spokesman Steve Orlando said that only three of the 24 carrying the virus showed symptoms and all of them were vaccinated.

Mumps is much less severe in people who are vaccinated.

The students may have shared such items as water bottles or utensils. They were identified as the Student Health Care Center tracked down contacts of those who did present with symptoms, tested and notified.

One of the students who did show symptoms was Caillin Heron, who woke up with her face unrecognizable, swollen like a "blowfish." The Army second lieutenant who just graduated last month from UF said that, at first, she thought she had a cold, but then she quickly got worse.

"I woke up and I knew I had a fever. You know how you can just tell? So I was freaking out. I took a bunch of ibuprofen. Then my roommate was, like, 'Your face, something is up.' I can’t even open my mouth," Heron told News4Jax via FaceTime on Friday.

Heron said she was diagnosed with mumps, which she thinks she contracted while on the UF campus.

According to the Health Department, Alachua County sees localized outbreaks such as this about every two to five years. Although the 24 confirmed cases this year is higher than the yearly baseline number of zero to two cases, a spokesman said this has not spread anywhere close to the way a virus, such as the flu, does and that most of the cases involve people who have been in close contact with one another.

The Health Department said 41 states have recently reported an increase in mumps cases, citing more people going without vaccinations as one of the reasons. 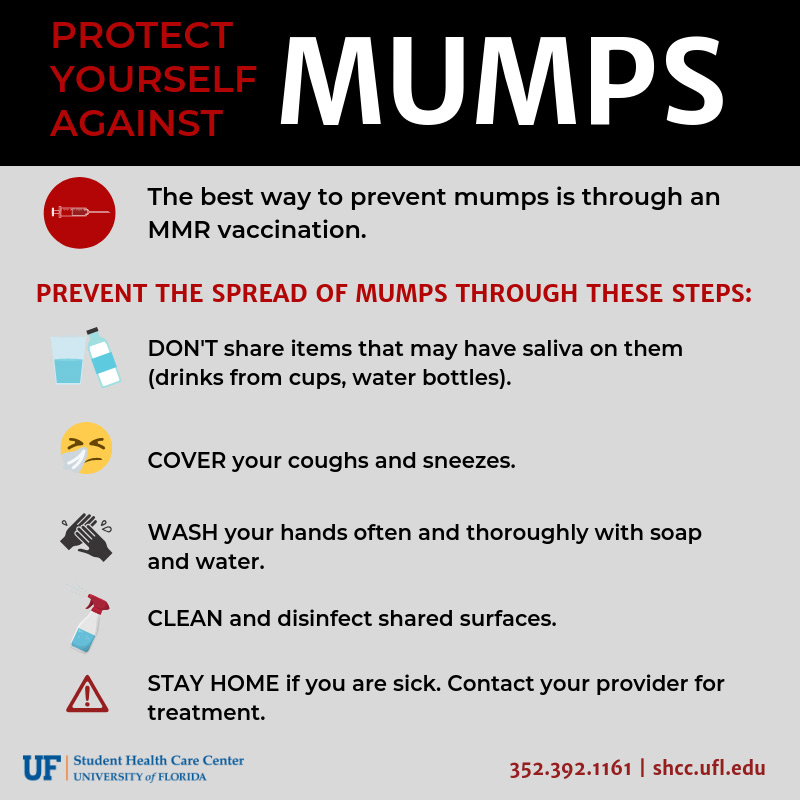 Dr. Mobeen Rathore, chief of infectious diseases with UF Health, said the only true way to prevent the virus is the MMR vaccine, which protects against measles, mumps and rubella.

"There’s just a lot of misinformation about what the vaccines do in terms of side effects, which are mostly bogus," Rathore said. "I think it’s important that you get your child immunized at the right time. Rhere is a reason we immunize children for measles, mumps and rubella."

The U.S. Centers for Disease Control and Prevention recommends children receive the first dose of the vaccine at 12 to 15 months of age and the second dose at 4 to 6 years old. According to the CDC, the vaccine is 88% effective.

Heron encourages people to get vaccinated because she doesn't want this to happen to anyone else, saying that, not only was mumps painful, but it can lead to other health issues in the future.

"For over a week, it was extremely painful. My face just really hurt -- my neck and cheek and hair area," she said. "At one point, I couldn’t even touch my ear, my ear hurt so bad."

UF said it has alerted students about the confirmed cases by sending messages through its campus alert system, which sends out emails and text messages.

The university asks students to take proper precautions as they would with the flu. Practicing good hygiene habits -- such as hand-washing, hand sanitizing and not sharing food and drinks -- can help, but, according to doctors, nothing will prevent the mumps as well as the vaccine.

VIEW: Information on mumps sent out to UF students

Though some UF students have gone home for the summer and haven't been in Gainesville for a couple of weeks, it can take, on average, 16 to 18 days for symptoms of mumps to show up. Those symptoms include fever and swelling on the side of the face and glands.