JACKSONVILLE, Fla. – A newborn baby taken from a Jacksonville hospital on July 10, 1998, has been found alive in South Carolina and officials have charged a 51-year-old woman with kidnapping, according to the Jacksonville Sheriff's Office.

Acting on recent tips, JSO cold-case detectives traveled to Walterboro, South Carolina, and found an 18-year-old woman with a matching birth date to Kamiyah Mobley, according to Sheriff Mike Williams. Detectives learned the woman's identity was established with fraudulent documents, and they took a DNA sample from her. Thursday night, the Florida Department of Law Enforcement lab confirmed the woman was Kamiyah.

The 18-year-old, who has been raised with the name Alexis Manigo, was told the results and a woman named Gloria Williams, who the teen believed was her biological mother, was arrested and charged with kidnapping and interference with custody. Williams waived extradition in court Friday and will be brought to Jacksonville to face the charges. She is being held without bond. [South Carolina arrest docket]

Williams and Alexis had been living in Walterboro, a city of about 5,400 people located about 50 miles west of Charleston.

At a Friday news conference of local, state and federal officials, Sheriff Williams said the victim began to have an inclination beginning a couple of months ago that she might have been kidnapped.

"She appears to be a normal 18-year-old woman," Sheriff Williams said. "She's taking it as well as you can imagine. She has a lot to process."

The girl's biological family still lives in Jacksonville and was elated to learn she had been found alive.

“They were overwhelmed with emotion,” Sheriff Williams said.

The search for the baby became a national story. The kidnapper, described at the time as being between 25 and 47 years old wearing a nurses' flower-print jacket, teal "scrubs" and surgical gloves, was captured in grainy surveillance video, but was never found.

Sheriff Williams said that over 2,500 tips had come in to the JSO or National Center for Missing and Exploited Children over the 18 years since the baby was taken, and even though the detectives working the original case had retired, others never stopped trying to find out what happened to the girl.

"Even when a case is deemed cold, we're always looking for new information, a tip or an advancement in technology. This is what we strive for, justice for our victims, no matter how long it takes," Sheriff Williams said. “This is a case like we have not seen in this country in a long time."

According to reports at the time, the girl's mother, Shanara Mobley, had just turned 16 and was befriended by a woman who passed herself off as a Mobley family member to the hospital and a medical professional to Shanara. 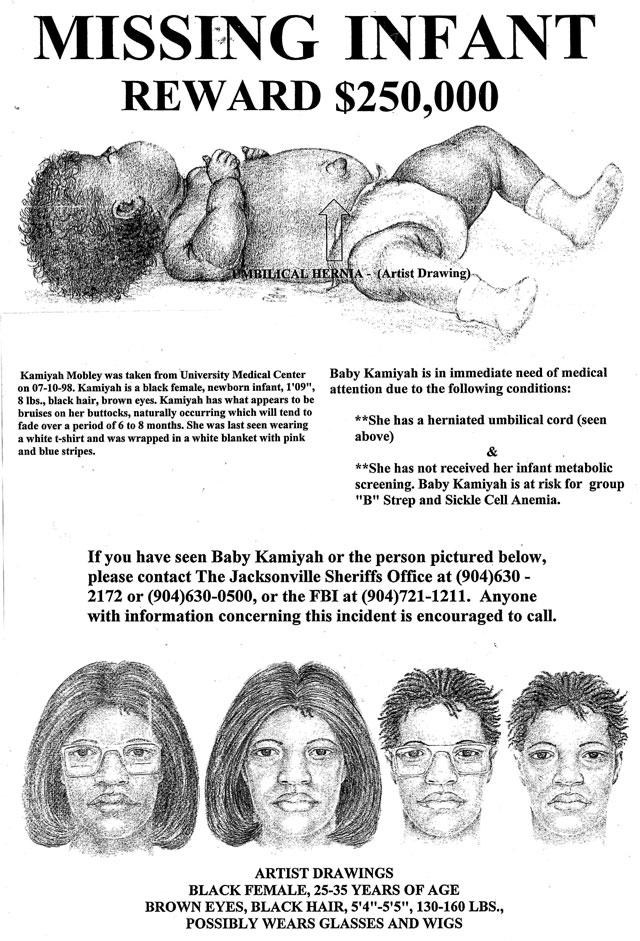 The baby's 19-year-old father, Craig Aiken, was in jail on a charge of lewd assault for having sex with a minor, because Shanara was 15 when he got her pregnant.

Shanara sued the hospital and was awarded a $1.5 million settlement, according CharleyProject.org. She has since had three more children.

After the kidnapping, the University Medical Center, which became Shands Jacksonville, then UF Health Jacksonville, also added wristbands and ankle bands for newborns, along with limiting access to the maternity ward, security and instituted kidnapping drills.

Other hospitals in Jacksonville and across the nation increased security in their maternity wards after the newborn's abduction.