Some Florida teachers will get vaccine priority. School bus drivers want to be included

Man accused of killing teen in 1994 pens letter from jail

JACKSONVILLE, Fla. – The former therapist and youth pastor accused of killing and dismembering a teenager more than 20 years ago has written a one-page, hand-written letter from jail.

Ronnie Hyde, 60, was arrested at his Jacksonville Beach home in March as the FBI searched for evidence connected to the 1994 murder of 16-year-old Fred Laster.

Investigators have not yet said what they found at the home, but Hyde is in the Duval County jail charged with murder and a dozen child pornography charges.

“I’m getting plenty of rest. I feel as if I’m on a ‘Sabbath Year,'" Hyde wrote in the letter obtained by News4Jax.com.

Hyde then said he appreciated the prayers for his release and he’s doing OK in jail exercising, writing and fantasizing.

“The other day I went to see the doctor and I really enjoyed the view from the office of the river and marina. I was imagining myself enjoying the river on one of the boats," Hyde wrote.

Those are just a few excerpts from the letter that was sent April 14 to a crime memorabilia collector in Georgia who wrote to Hyde in jail. He then traded it with Eric Holler, owner of SerialKillersInk.net, who sells letters and other items linked to notorious murders. 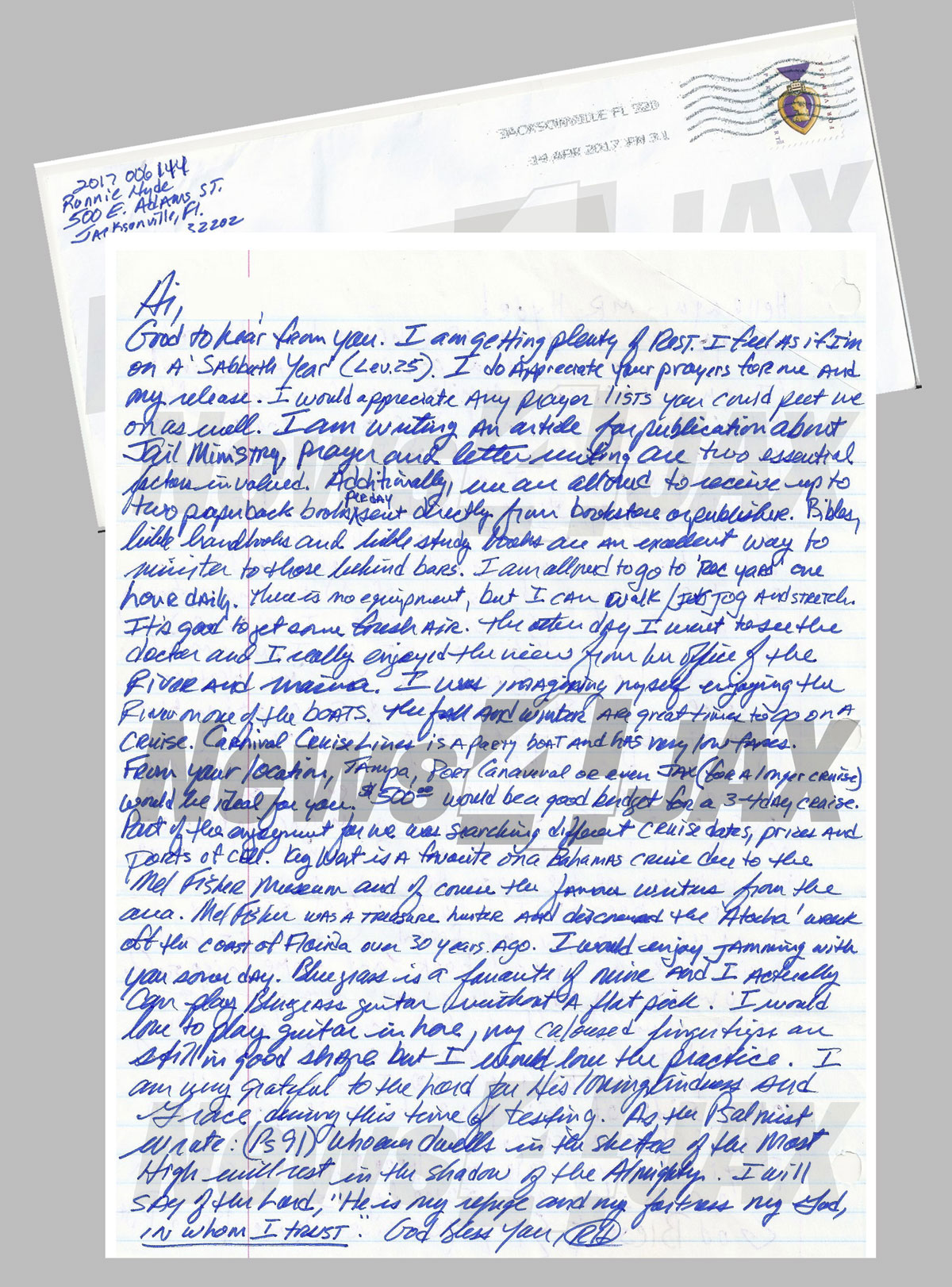 Hyde wrote his pen-pal about going on a cruise, playing guitar and he quotes Bible verses, including, "He is my refuge and my fortress, my God, in whom I trust."

News4Jax asked a forensic psychologist to analyze the letter.

"He is very prayerful and it's almost like he is looking forward to getting out soon," said Dr. Justin D'Arienzo.

D’Arienzo is not involved in the case and has never met Hyde, but says the letter is unusual.

"He is getting rest. That's what stood out to me first: He's finally getting some rest," D’Arienzo said.

"We don't know if he's guilty or not. We don't know what the motivation may be. But there has been talk about him being a sociopath, which is somebody that exploits people and also does not experience guilt, shame. They basically don't have a conscience," D’Arienzo said.