JACKSONVILLE, Fla. – Hundreds of family, friends, law enforcement members and community leaders gathered Wednesday to honor and say their final goodbyes to a 17-year veteran with the Jacksonville Sheriff’s Office who was killed in a single-car crash earlier this month.

Loved ones and fellow officers shared stories and fond memories of Officer Lance Whitaker at Evangel Temple on Ramona Boulevard, and JSO's chaplain led those in attendance in a standing ovation for the fallen officer and his family.

Whitaker was described as a mentor to those on his squad and as a man who deeply loved his family and his community. He leaves behind a 14-year-old son, a fiancee and his fiancee's three children, who considered him their stepfather.

Whitaker's work as an officer was described as a calling on his life. Law enforcement agencies from around the state were represented among the hundreds who came to pay their respects Wednesday.

“We mourn today, as we should. But that should turn to a celebration of Lance's life and an everyday effort to honor Lance's memory,” Williams said. “Lance loved his calling. He loved his community. He loved being a police officer. He loved it so much he gave his life for it.”

RELATED: Fallen officer 'would do anything for anybody,' fiancee says 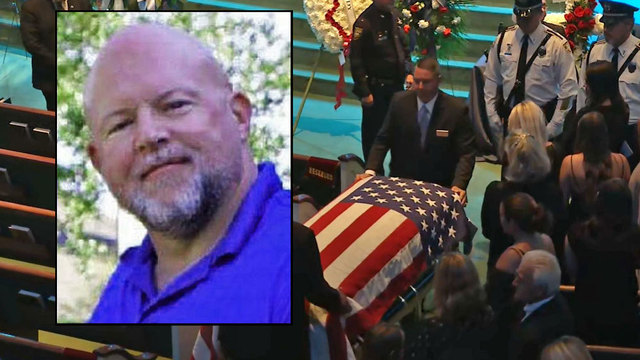 Williams said the highest honor Whitaker's colleagues could show would be to live their lives with the same strength, compassion and courage that Whitaker showed every day that he put on his uniform.

Following the service, Whitaker was laid to rest at Oaklawn Cemetery with full honors from the Jacksonville Sheriff’s Office Honor Guard.

JSO also broadcast the last radio call for Whitaker from the graveside Wednesday.

Shelly Grant, who has been friends with Whitaker since high school, said that Whitaker's watch might have ended on earth, but that he is still watching over all those who loved him.

"God has given him a promotion to a much higher zone," she said. "We love you very much, Lance. You will always be with us."

The U.S. Honor Flag, which has traveled over seven million miles and honored thousands of heroes, was placed next to Whitaker on Tuesday.

We are so proud the @USHonorFlag came into town to recognize #JSO Ofcr Lance Whitaker. Honor Guard, Lt. Yarbrough was honored to present the flag and place it next to Ofcr Whitaker. The flag has traveled over 7 million miles, and has honored 1,000’s of heroes. #NeverForget7656 pic.twitter.com/QdzU64O6qF

The flag isn't the only Honor Guard ritual following a line of duty death. Another ritual is the "casket watch" when the Honor Guard takes shifts so the fallen officer is never left alone until burial, the Sheriff's Office explained.

Gov. Scott also ordered that the U.S. and state flags at the Duval County Courthouse, City Hall in Jacksonville, the Jacksonville Sheriff’s Office, and the State Capitol in Tallahassee be flown at half staff from sunrise to sunset Wednesday. Scott also attended the funeral.

"Every day our brave men and women in law enforcement risk their lives to keep our communities safe, and we must demonstrate our gratitude for their sacrifices," Scott said in a statement. "Tonight, I ask every Floridian to join us in praying for Officer Whitaker’s family during this incredibly difficult time.”

For those who could not attend the procession but want to support Whitaker's family, visit this link to purchase a shirt made in his honor.

The shirts are being sold online through midnight Saturday for $25. All of the profits go to Whitaker's family.