10 warnings in effect for 7 counties in the area

Ditch your gym membership with this home gym bundle

JACKSONVILLE, Fla. – The two cooling towers at the St. Johns River Power Park on Jacksonville's Northside imploded right on time in just 12 seconds Saturday morning, leaving a cloud of dust and an end of an era.

The dynamite -- 1,500 pounds of it -- was placed inside 3,800 holes for the big boom that changed the city's skyline for good. At least 2 miles of detonation cable was used to have the towers collapse into each other.

SEE IT AGAIN: Live coverage of implosion |
Replay of 4 camera angles of implosion
IMAGES: Cooling towers go up in cloud of dust

Many homeowners across the river in Arlington said their houses shook when the blast went off to bring the towers down.

Thomas Francese is one of many who drove as close as he could to see the 8 a.m. implosion in person.

"I hadn't seen anything implode before. It just kind of looked like a wet noodle fall over. It was kind of crazy to see something that big just fall over like that," Francese said.

Anthony Neufville was among the crowds of people who lined up to watch the implosion.

"For me, I thought it was going to be a little bit louder. For the most part, it was exactly what I expected," Neufville said.

Many said they were amazed by the spectacle.

"I really thought it was cool!," said Elaine Dressler who watched the cooling towers come down.

Now that the implosion is over, all that remains is a field of debris which has some observers, including Thomas Francese, with mixed emotions.

"It's going to be completely different. Coming over the bridges, you won't even see these big towers anymore," Francese said.

Others are also feeling a little sad that the landscape will change.

"Going over the Dames Point Bridge especially, not being able to see it, we've lived here our whole lives so it will change it a little bit," said resident Renee Tompkins.

The closest spectators were able to get was Faye Road and New Berlin Road.

Some people are not sorry to see the towers go.

"I work in a building, a little subdivision up here and I see the towers every day. Wipe the soot off my windows, so it will be nice not to have that," said Rodney Staley.

The demolition company partnered with Dreams Come True to auction off the privilege to the push the plunger to begin the tower's implosion.

The winning bid of $6,000 was made by David Mahon, of Ponte Vedra Beach. He decided to give his 18-year-old son the honor.

The money raised in the auction goes to Dreams Come True, an organization dedicated to fulfilling the dreams of local children with life-threatening illnesses.

"I got to do something fun, but at the end of the day a lot of money went to a good cause, and people really deserving of it are are going to get access to it," said Brian Mahon.

One large plume of dust burst into the air, leaving behind scores of small debris particles. Officials said 99 percent of the waste will be recycled and used as road and construction base.​

Crews also had dust-control machines in place that blew streams of finely misted water several hundred feet high to capture and knock down the dust. 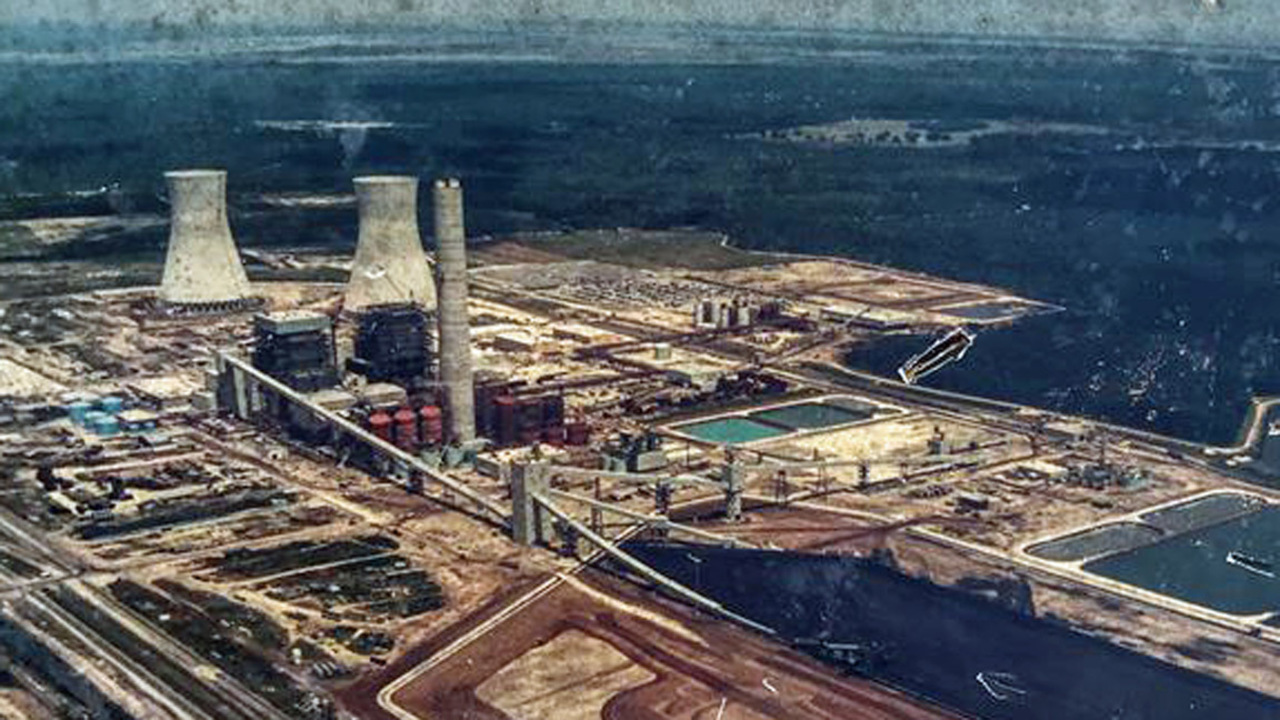 History of the cooling towers

Tony Crawford, who worked at the power park from the beginning, said the implosion was an end of an era.

"It’s bittersweet after all the years of trying to be the best at what we do and to see it come to a quick close. You have mixed emotions," Crawford said.

For one family watching the implosion, the event held a special meaning. It was a way to say goodbye again. Teddy Meyer said his dad, Theodore, died when he flew his ultra-light plane over the cooling towers back in 1984.

That mistake cost him his life when the updraft caused the wings to collapse. Teddy was just 11 years old when his dad died in the crash and said the implosion brings his family some closure.

"It’s kind of a gray area because he was a daredevil," Meyer said.

For others, it was a celebration of sorts. Former Mayor Jake Godbold was there when the towers went on line.

"I cut the ribbon when we build them. And now I’m still here and have the privilege of seeing them come down. I’m glad we are moving to the next Phase. It was the right thing to do when we did it and we’re moving on to a cleaner production of power," said Godbold.

JEA said the plant was no longer needed because other sources of energy are cheaper. Although the cost of closing the power park will run around $65 million.

Some former employees, including Jay Worley, say there is an emotional cost as well.

"When you see something like that come down, it does take something away from you, internally and emotionally. But it’s still a great thing to see because everything has a season," said Worley.

So even though the towers are down there is still a lot of work to be done as 99 percent of the rebar material will be recycled.

The towers were each nearly 500 feet tall, so each tower stood at 464 feet -- about a hundred feet shorter than the Washington Monument.

Combined, the two towers were made of more than 100,000 tons of concrete, and that weight was supported by another 4,000 tons of steel rods.

The demolition of the cooling towers is just the first step for the power company that plans to do much more at the St. Johns River Power Park which was shared by JEA and Florida, Power and Light.

Imploding the two huge concrete towers is only the beginning of what's to come at the St Johns River Power Park. Gerri Boyce with JEA said more changes are coming in the near future.

"In about 18 months to maybe 2 years, you’ll see this (building) completely demolished and then we start the next phase on what’s going to happen with the property.  It will be JEA’s after the demolition.  Then JEA will see what happens with the property.  That has not been decided," Boyce said.

JEA and Florida Power and Light have run the old coal plants since the 1980's and they're outdated as utilities move toward other power sources like solar and natural gas.

Eric Silagy is CEO of Florida Power and Light. 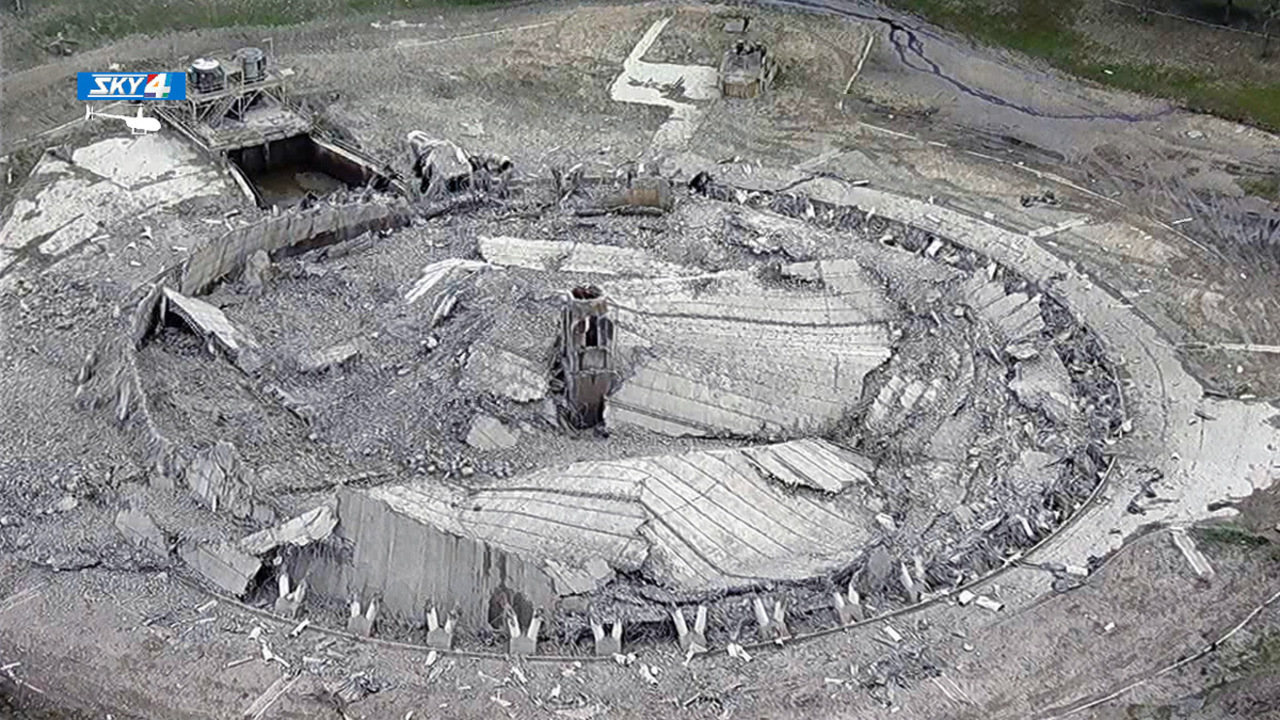 We’ll bring an army of equipment in (that) look like big dinosaurs. Processor pieces, munching up the concrete, turning them into small stones," said Frank Bodami with Total Wrecking.

While the park is shutting down, the nearby Northside JEA generating station is still in operation and expected to remain that way.

The next step will happen this fall when another tower will be imploded.

Bringing the towers down should reduce JEA's carbon footprint by 30 percent.