JACKSONVILLE, Fla. – A major development called the Village Center is slated to be built in the area of Interstate 295 and J. Turner Butler Boulevard, near the St. Johns Town Center.

The $300 million project was rolled out Thursday in front of business leaders from across the city at TIAA Bank Field.

"It's an enormous infrastructure project that will start within a year," said Jeff Fuqua, the Atlanta developer behind the Village Center.

Fuqua, of Fuqua Development, said it won't compete with the St. Johns Town Center But, rather, it would complement it. He told News4Jax that he would not have tried to build a project like this anywhere else, but the land is valuable and businesses in the area make a lot of money. 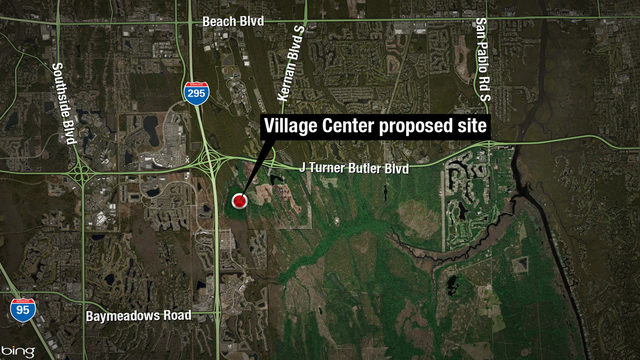 "I’ll tell you what, if there wasn’t a site like that, I wouldn’t have tried it. But that market has such good representation nationally and all the retailers in the multifamily offices do so well there," Fuqua said. "We feel like can handle a project of this scope."

Computer-generated images show what people can expect to be built -- everything from a movie theater to an amphitheater, restaurants and retail. As reported by News4Jax news partner, the Jax Daily Record, the development is also expected to include, an indoor-outdoor bar, stationary food trucks, a specialty grocery store, apartments, two luxury hotels and office space.

Fuqua said the development will bring a lot of jobs.

People who live in the area, which has been bursting with development for well over a decade, told News4Jax that they have become accustomed to all the construction. One of them, Roza Hirpa, said she welcomes the addition.

"I feel like Jacksonville is booming," she said. "There’s a lot for people moving to Jacksonville."

This isn't the only deal in the area. Beyond the 67-acre project, a housing developer is looking to buy another 400 to 500 acres from land owned by the Skinner family. on the southeast corner of the Butler Boulevard and I-295 intersection that he intends to buy from the Skinner family. Those deals are expected to be completed early next year.