Lights in the sky? Here’s what Jacksonville-area residents saw after looking up Friday night

JACKSONVILLE, Fla. – Wednesday’s death of a 4-month-old girl who was left for hours inside a van parked outside a Jacksonville day care underscores the continuing problem of hot car deaths.

The girl was found unconscious in the van parked outside Ewing’s Love & Hope Preschool & Academy on Lenox Avenue about 1 p.m., Jacksonville Sheriff’s Office Asst. Chief Bryan Kee said. Based on preliminary details, he said police believe the child was left in the vehicle for nearly five hours.

Despite efforts to resuscitate the child, she was later pronounced dead at Wolfson Children’s Hospital.

The little girl’s death is just the latest example of an avoidable accident that often comes with deadly consequences. Across the country, 52 children died of heatstroke last year because they were left inside hot vehicles. Of those, five happened here in Florida.

Statistically, 56 percent of cases from 1990 through 2018 involved a parent unknowingly leaving their children in the car, according to data provided by KidsAndCars.Org. Florida is the second-leading state when it comes to hot car deaths (93), trailing only Texas (125). 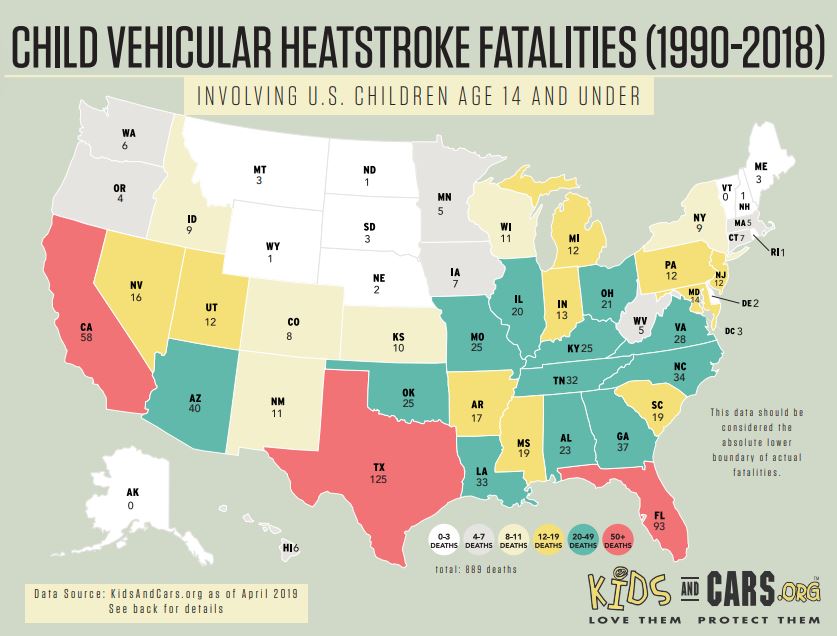 While it stands to reason that there might be more deaths in states with warmer weather, especially as temperatures peak over the summer, it doesn’t have to be sweltering outside for tragedy to strike. Children have died from heatstroke in cars when it’s as cool as 60 degrees outside.

It can happen to anyone. Just ask Miles Harrison.

Even though 11 years have ticked by since Harrison lost his son, he still hasn’t forgiven himself. He thought he had dropped off his 21-month-old son, Chase, at day care that day. It wasn’t until later when he noticed his son inside the car that he realized what had happened: “I had killed my son."

Chase’s death was ruled an accident, but the guilt Harrison carries to this day is almost like a life sentence. “I have not forgiven myself and don’t know if I have the capacity to do so,” he said.

Harrison tells Chase’s story to anyone who will listen in the hopes of keeping someone else from making the same mistake. He’s been outspoken about his desire to see vehicles equipped with alarm systems that help prevent children from being left behind.

“If there had been a simple chime to alert me to my son’s presence, none of this can happen,” he said.

On Thursday morning, federal lawmakers will hear testimony about summer driving dangers, including hot car deaths. Harrison is among the guests scheduled to speak at the hearing.