More than 1,000 gather in Gilchrist County as slain deputies laid to rest

BELL, Fla. – The thin blue line stretched for miles Tuesday afternoon along a Gilchrist County street as officers and deputies from across Florida and around the nation lined up to pay their respects to two fallen comrades.

Sgt. Noel Ramirez, 29, and Deputy Taylor Lindsey, 25, were gunned down in the line of duty last Thursday as they were eating together at a Trenton restaurant.

Sheriff Bobby Schultz, Florida Gov. Rick Scott, and family members of the two deputies made remarks Tuesday as an honor guard stood in front of two flag-draped coffins at the front of a packed auditorium at Bell Middle/High School.

"We will never understand why these heroes were taken from us so young," Scott said.

"Both of these guys were fun-loving, God-fearing, good, good men," Schultz said.

Schultz said his department received thousands of handwritten cards and that the outpouring speaks volumes about Ramirez and Lindsey.

"We do indeed miss our friends," Schultz said.

"They died for what was right and good and decent," Bible said.

Law enforcement vehicles from around the state joined a 15-mile long procession, one of the longest in Florida history, from Bell to the Bronson Cemetery, about 35 miles away in Bronson, Florida, where a graveside service was held.

"It really hurts me, and that’s why I’m out here today. We all knew him so little, but we know him so much here," Angelika Schultz said, touching her heart.

Schultz said Ramirez helped initiate a program for the Sheriff's Office to help deputies recognize those with autism after his own child was diagnosed with autism. He said Lindsey was instrumental in developing a system for focus areas in the county to help make the streets safer. 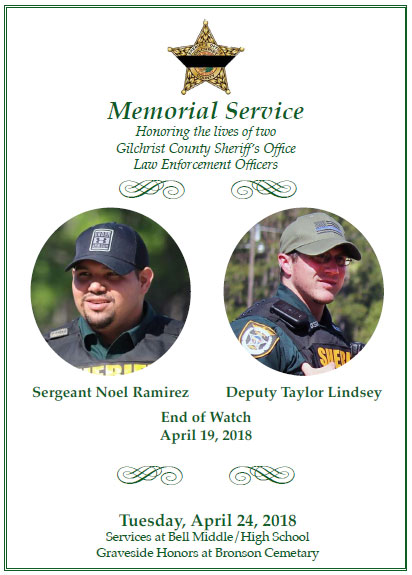 Lindsey, who the sheriff said worked on Ramirez's shift, served more than three years with the Gilchrist County Sheriff’s Office, first joining the agency in 2013.

Taps was played, the bagpipes sounded and a 21-gun salute, a final radio dispatch to the two fallen deputies was broadcast to area law enforcement officers:

Sgt. Ramirez may you rest in peace knowing that your strength and courage will live on in your family, your legacy will be carried on in your children and your honor will continue on with us. Papa 268 - you are cleared for your End of Watch. Thank you for your service - rest easy, we have your watch from here.

Deputy Lindsey may you rest in peace knowing that your light will continue to shine in this world where you left your mark while your family continues to carry on your legacy. Papa 293 - you are cleared for your End of Watch. Thank you for your service - rest easy, we have your watch from here.