‘They spent their entire lives in cages’: Local animal rescue organization helps to transport 60 beagles to safe shelters across US

ORANGE PARK, Fla. – Federal and local law enforcement are on the hunt for a man accused of robbing more than a half-dozen banks in the Southeast, the most recent holdup occurring at the SunTrust Bank on Blanding Boulevard, according to the Clay County Sheriff's Office.

After the robbery Wednesday morning at the SunTrust Bank in Orange Park, deputies announced that they identified the serial bank robbery suspect as Myron William Ernst, who appears on one of the FBI's "Most Wanted" lists. 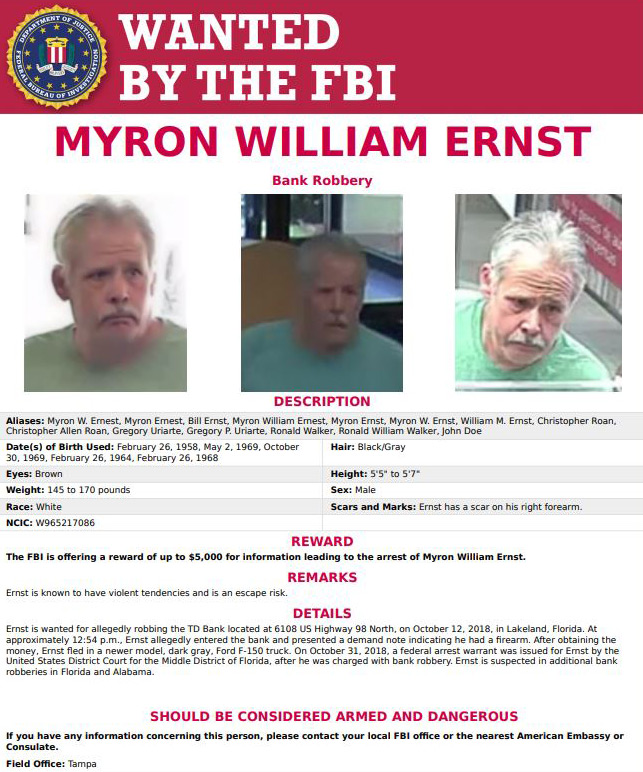 Authorities said Ernst, 60, recently violated his probation and has been on the run from South Carolina.

According to the FBI, Ernst pleaded guilty to robbing six banks, including the Bank of America in Orange Park in 2009, and was sentenced to 11 years in federal prison in 2010.

He won early release in August and was placed on supervised probation.

The FBI said he ditched his monitoring device in September, and another robbery spree began in Alabama and Florida, including a holdup Oct. 12 at the TD Bank on U.S. Highway 98 North in Lakeland, Florida. The FBI said Ernst entered the bank, showed a note indicating he had a firearm and then took off with money in a newer model, dark gray Ford F-150 pickup truck.

On Oct. 31, the FBI said, a federal arrest warrant was issued for Ernst, who is described as being 5 feet 5 inches to 5 feet 7 inches tall, weighing 145 to 170 pounds and having black/gray hair and brown eyes with a scar on his right forearm.

According to the FBI, Ernst is only charged with the robbery in Lakeland. He is suspected in seven others.

The FBI is offering a reward of up to $5,000 for information leading to Ernst's arrest. The "Wanted by the FBI" poster notes "Ernst is known to have violent tendencies and is an escape risk."

Anyone with information about him or his whereabouts is asked to call 911, call the Sheriff's Office at 904-264-6512, submit a tip at claysheriff.com/see-something-say-something or call First Coast Crime Stoppers at 1-866-845-TIP.

There was another bank robbery across the river at the Wells Fargo in Bartram Park, but Jacksonville police said it was not connected.

Jacksonville native and proud University of Florida graduate who joined News4JAX in 2016.