A community's wish: For HaLeigh Cummings to come home

Though time has passed, southern Putnam County has not forgotten the 5-year-old girl who disappeared into thin air and has never been found. Despair lingers in the small community, but so does a wish.

For a decade, one word has remained on the sign outside Hill’s Hardware store in Pomona Park: HaLeigh.

The owners never met the little girl who lived just 7 miles away in Satsuma, but that doesn’t matter.

“She’s a child,” owner Kathy Sheffield said. “Doesn’t matter whose child.  She is a child.”

Her husband, Roger, tears up at the thought of HaLeigh.

“Somebody, somewhere knows something. I just hope they will ride by this store enough times that at some point they will break and we will find out what really happened to that child,” he said. “She needs closure. The family needs closure.”

Until then, HaLeigh’s name will remain on the sign.

Mark Hall does not need to look at the sign when he stops at Hill’s Hardware to be reminded of the young girl with blonde hair and brown eyes. He still gets choked up thinking about when he and his wife volunteered to search for HaLeigh on Valentine’s Day 2009, four days after she disappeared.

“I can’t tell you how long we walked,” Hall said.

HaLeigh was last known to be sleeping in bed on Feb. 9, 2009, next to her little brother, Ronald Cummings Jr. or “Junior,” with her father’s girlfriend, 17-year-old Misty Croslin, who was babysitting while HaLeigh’s father, Ronald Cummings, was working an evening shift at his job.

When Cummings returned to his mobile home in Satsuma, his daughter was gone.

Croslin said she fell asleep and when she woke up in the early morning hours of Feb. 10, 2009, HaLeigh was not there.

“The rear door of the residence was found to be open,” then-Putnam County Sheriff Jeff Hardy said hours after the search began.

The search for the 5-year-old went on for months. In the air, helicopters from different agencies scoured the area. On the water, boats spanned out on the St. Johns River. On the ground, every car was checked leading out of HaLeigh’s neighborhood. Searchers, including Hall, scoured woods and thick forest around the neighborhood. Hall remembers that he and the other searchers were told to look for any ground that appeared like it had been freshly unearthed.

“They were adamant we stay in a straight line,” he recounted.

Customers and employees of Mema’s Restaurant in Satsuma, just two blocks away from where HaLeigh lived, also remember that time and the feelings it evoked.

A missing child was unheard of in the close-knit community.

“The biggest overwhelming feeling was that this neighborhood was unsafe,” Alford said. “It went from safe to unsafe.”

At the time, HaLeigh’s father and mother, Crystal Sheffield, begged, prayed and wished their daughter would come home.

“I just want whoever’s got her to bring her back,” Sheffield said.

Ten years later, their pain has not diminished one ounce. Neither has HaLeigh’s great-grandmother’s.

Upon walking into the home of Annette Sykes, there is a wall that cannot be missed. The wall, called “HaLeigh’s Room,” is covered with cards and letters, as well as cards and posters made by students of Browning Pearce Elementary School, where Sykes’ great-granddaughter attended kindergarten before disappearing.

“When she comes home, they’ll all be here for her,” Sykes said.

Sykes has remained steadfast from the moments News4Jax first met her in HaLeigh’s neighborhood, to the vigils held each year since. She is still haunted by the last day she saw her great-granddaughter.

“HaLeigh and Junior were sitting on the front porch, eating supper when I got there and they jumped out of their chair and yelled, ‘Granny, Granny,’ and hugged my neck. I kissed them goodbye. I didn’t know that was the last time I would ever see her or I would have never left. To know a few hours later that she was gone and no one knew where or why,” she cried.

“If I had only stayed there.”

HaLeigh’s grandmother, Teresa Neves, has spent 10 years punishing herself over the thought she may have somehow overlooked some sign.

“I just don’t know what I missed,” Neves said.

Could it be the person who took HaLeigh is someone she knew? Someone close to the family? The family and the community may never know.

“Somebody stole my child out of my bed,” Cummings said days after his daughter disappeared. “I come home from work and my child was not there. That’s all there is to it. Gone – like that.”

No one has ever been charged in the little girl’s disappearance.

“How do you get could someone to be so evil as not tell you where a child is,” Neves said.

There have been many theories about what happened the night the 5-year-old went to sleep inside the Satsuma mobile home in her father’s bedroom and vanished in the middle of the night. Not one has been proven, leaving her family exactly where they were 10 years ago: begging that their one wish will be granted. 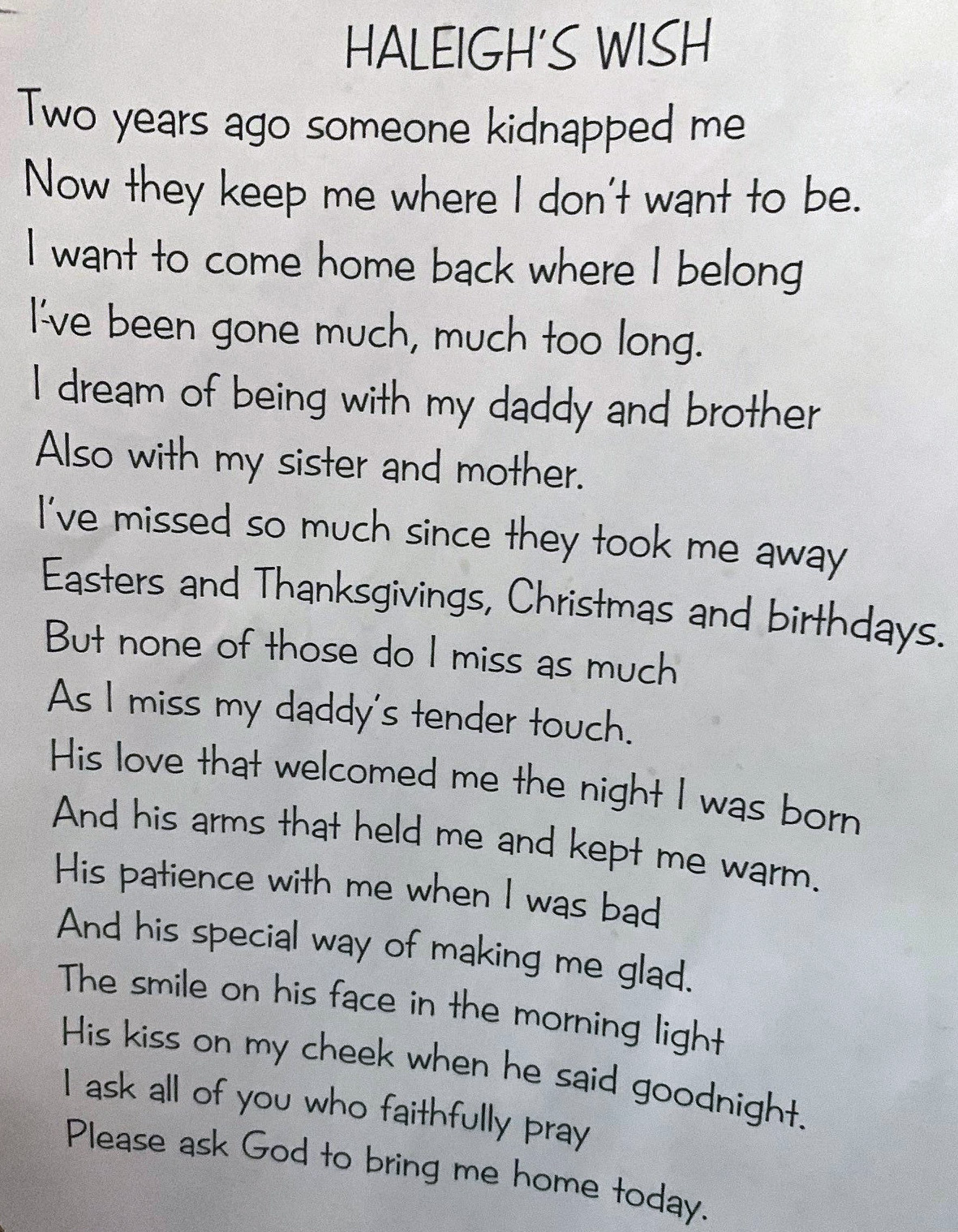 “Please, please, please just bring her home,” said Neves, sniffling. “Tell us where she is. Tell us. Give us anything. Just something. Anything.”

“Bring my cousin home,” cried Jermonick Luther, who was 8 years old when HaLeigh disappeared. “That’s all I want. I will be 19 in July. I just want her to come home for my birthday. That’s my only wish.”

And, it is HaLeigh’s wish. Her great-grandmother, who writes a poem every year on Feb. 10, wrote one poem titled just that.

“I ask all of you who faithfully pray, please ask God to bring me home today,” the poem ends.

The missing child’s case was classified as a homicide investigation just over a year after HaLeigh’s disappearance, but it remains open and HaLeigh's listing remains active on the National Center for Missing and Exploited Children's website.

Her family and the Putnam County community still cling to hope and wish for HaLeigh’s return home.

On this poignant date of the 10th year of HaLeigh’s disappearance, News4Jax is hoping renewed attention to the case will generate new information about what happened to HaLeigh, who would be turning 16 years in August and be in 10th-grade, for the sake of her family and her community.

Anyone who witnessed or knows anything about the disappearance of the kindergartner is urged to call Crime Stoppers of Northeast Florida at 888-277-TIPS. Callers can remain anonymous and be eligible for a $15,000 reward for information that is called into the tip line and leads to an arrest in the case.

Beginning Monday, you can listen to the first episode of “Into Thin Air,” our podcast series on the disappearance on HaLeigh Cummings, a case that haunts investigators to this day.

Jacksonville native and proud University of Florida graduate who joined News4JAX in 2016.