To promote social distancing, city to launch 4th of July fireworks from 6 spots

Man found shot to death in roadway on Buckman Street

High-rise in zone A, which was under mandatory evacuation order ahead of Dorian

JACKSONVILLE, Fla. – One week after Hurricane Dorian passed off the coast of Northeast Florida, the News4Jax I-TEAM obtained a Jacksonville fire marshal report detailing how sandbags blocked doors and power was cut off to the elevator system at a high-rise senior living facility that was in an evacuation zone.

Days ahead of a much-anticipated storm, Jacksonville Mayor Lenny Curry issued a mandatory evacuation order for zones A and B. The Towers of Jacksonville along the St. Johns River in San Marco is in evacuation zone A. During Hurricane Irma in 2017, the first floor of the building flooded.

"My husband was bedridden and I wanted to be evacuated. I had packed. I did the paperwork but nobody came to pick us up. So, we ended up staying," said Rhonda Riggins, who lives at Towers of Jacksonville. "You need a Hoyer lift. I can get him in the wheelchair with it, but to get him out?" 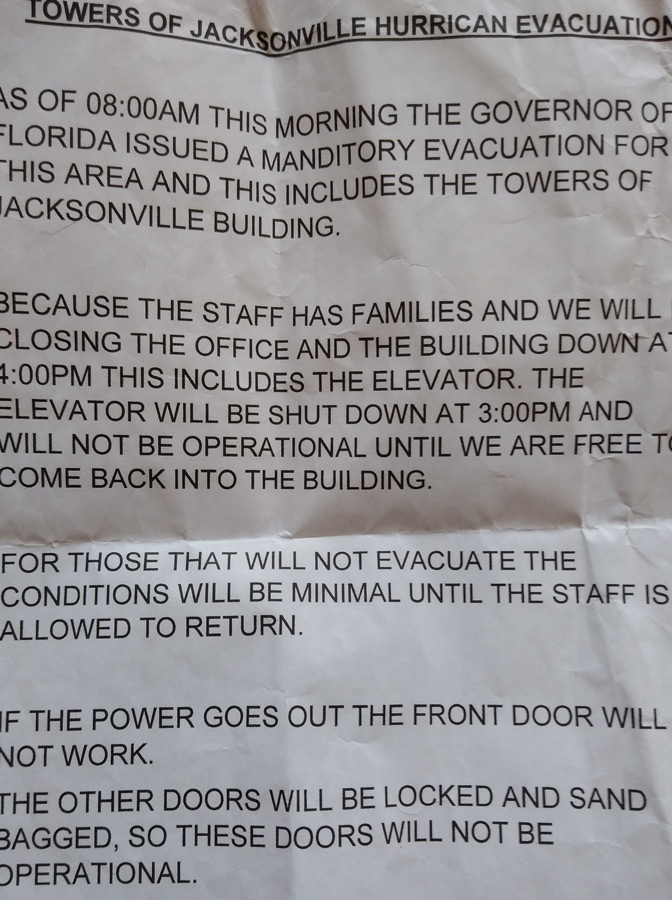 Evacuation notices posted inside the 12-floor senior living facility ahead of Hurricane Dorian warned residents, "The Towers of Jacksonville will be 100% evacuated if there is a declared mandatory evacuation" and that "because the staff has families and we will be closing the office and the building down at 4 p.m. this includes the elevator. The elevator will be shut down at 3 p.m. and will not be operational until we are free to come back in the building. For those that will not evacuate the conditions will be minimal until the staff is allowed to return."

The Jacksonville Fire and Rescue Department said it responded to the building on Sept. 2, the day the evacuation order went into effect, and found an elderly person who needed medical attention after trying to walk up several flights of stairs to reach their apartment unit.

According to the Jacksonville fire marshal report obtained by the I-TEAM, "numerous residents" decided to stay. The report stated first responders discovered "sandbags had been placed in front of and on the exterior side of all but one designated exit doorway and that power to the building's elevator had been terminated."

In a statement to the I-TEAM, the vice president of affordable housing for the Retirement Housing Foundation said, "When the order was given for mandatory evacuation due to Hurricane Dorian, in an attempt to keep the elevator operational in case of flooding and to prevent as much first floor flooding as possible, we sandbagged certain doors (not emergency exits) which faced the river and placed the elevator at an upper floor. Staff went door to door of all the residents to inform them of the mandatory evacuation and the steps that were being taken to prepare for the hurricane. When informed by the Fire Department that we could not do this, staff rectified the problem immediately. At no time were any doors chained shut or utilities turned off to the building."

The fire marshal report stated first responders were able to restore power to the elevator system and removed the sandbags from blocking the exit doors.

"An elevator technician had to respond to get the elevator fully operational," the report noted.

According to JFRD, turning off power to the elevator and blocking exits is against the law, specifically Florida Statute 83.67, which "expressly prohibits a landlord from intentionally terminating any utility services provided to their tenants."

Jacksonville Fire Marshal and JFRD Chief of Fire Prevention Kevin Jones wrote, "Mandatory evacuation orders do not allow landlords and/or property managers to diminish the safety of its tenants by blocking designated exits, terminating power to elevator systems, or reducing their access to domestic water supplies and/or central heat and air systems."

Jones also said that in the event of an emergency, such as a heart attack or a fall resulting in back or neck injuries, "precious minutes would be lost, and these minutes could make the difference between life and death."

Judy Summerlin lives at Towers of Jacksonville, but said, thankfully, she had children near to pick her up after hearing the building was being evacuated.

"My daughter is the one who called and said, 'You are in the flood zone and you better get out of there,'" Summerlin said. "I mean, I got this walker and I got my dog. I would've been like a prisoner."

The statement from the RHF vice president also noted the damage that the building sustained during Irma.

"Hurricane Irma caused major damage to the Towers of Jacksonville resulting in (among other things) the elevator being inoperable for five days and the first floor being inundated with 2 ½ feet of water," the statement said.