JACKSONVILLE, Fla. – JEA utility crews will continue repairs Tuesday to a water main break in San Marco that was the second in less than a week.

The water main break was reported Sunday evening on Landon Avenue at Arcadia and flooded the immediate area.

Water service was restored to all customers in San Marco and the Southbank early Monday morning. More than 3,000 homes and businesses in the surrounding neighborhoods are under a boil water alert. A JEA spokeswoman said that the first test of the water came back clean, but another test must be done Wednesday. If the second test comes back clear, the boil water advisory will be lifted.

Crews will be replacing the broken pipe on Tuesday and take the next couple of days to continue repairs.

"Everything is fine. It's just more of a nuisance ... making sure you have bottled and purchase products for people to consume," said Sam Efron of Taverna.

"Right now we are concentrating on fixing the pipe," JEA spokeswoman Gerri Boyce said. "Once that is completed, then we will start looking at what caused it and looking at what to do so it doesn’t happen again."

JEA said that with 3,000 miles of water pipe in its system, sometimes pipes can break despite  proactively checking its system throughout the year. 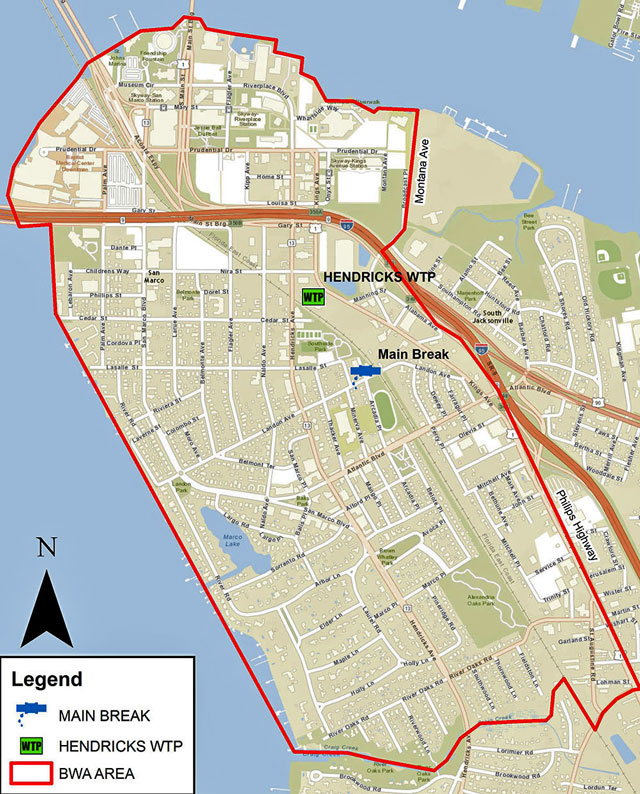 "What we will do now is see how it's performing overall. If it looks like we need to replace it, it will be in one of our future capital budgets," Boyce said.

JEA says anyone who lost water pressure is under the boil water advisory. Water should be boiled for a minimum of one minute prior to using for drinking, food preparation, or cooking.

It is recommended that customers flush water lines for three minutes after water returns in order to remove any air and possible sediments from the lines. The boil notice will remain in effect until the problem has been corrected and two consecutive days of satisfactory bacteriological results have been obtained.

JEA crews had to work Thanksgiving Day when a water main break flooded roads in the Miramar neighborhood off San Jose, but only about 20 customers were affected by that outage.