American Academy of Pediatrics: Schools need over $200B from feds to reopen safely

Despite state order, Clay County family says it was evicted from home

PALATKA, Fla. – Four years after a Putnam County Little League baseball coach and former Marine was murdered inside his Putnam County home, his ex-wife is doing whatever she can to find out who killed him.

Thomas Wall was shot to death inside his home on Landmark Avenue in San Mateo late on the night of Jan. 18, 2015. The investigation into who killed him remains open.

Tiffany Wall, the victim's ex-wife, went to several intersections near where he was killed, passing out hundreds of flyers and asking anyone she came in contact with if they knew anything that could help catch a killer.

"My son is growing up without a father," Tiffany Wall told a passerby. "His murder is still unsolved. If anyone knows anything, please show that to your friends and family and call that number on the bottom."

She called her ex-husband Joe. He only lived to be 34 years old.

"He was amazing," Tiffany Wall said. "He was a loving father, a great person. We got together right after high school. (He) joined the Marine Corps. (He was) so (was) excited to become a father."

Because he was gone a lot, "I would show (their son) on the globe where his father was."

Tiffany Wall said he would give anyone the shirt off his back.

"This man, even after we separated and divorced, if I called him and needed new tires for my car, he would do it because he wanted me and his child to be safe. That was the kind of person he was." 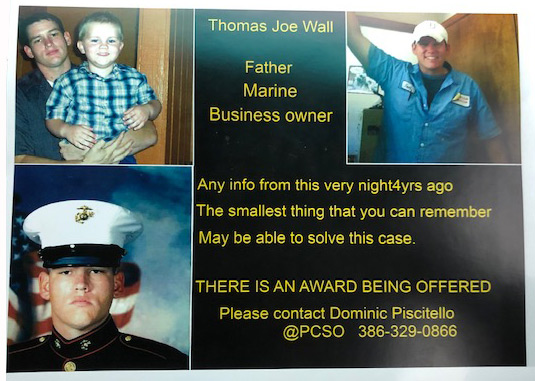 Asked why she was out talking about Thomas Wall with everyone she could find, she said, "I am out here today because Joe deserves justice.  If somebody or anybody can remember anything that night."

Each year on this day, she drops to her knees and prays to get answers.

Anyone with any information is asked to contact the Putnam County Sheriff’s Office at 386-329-0808.