News, weather, features and events to get your weekend started right.

Warmth and rain chances for the weekend

YULEE, Fla. – Blood found on Kimberly Kessler’s boot, a sock, a pair of scissors found in a car and storage locker belonging to her was an almost certain match with that of Joleen Cummings, her co-worker at a Nassau County hair salon she is accused of killing, according to a Florida Department of Law Enforcement DNA analysis.

Investigators also found one of Cummings' fingernails in a blue bin in Kessler's storage unit.

This, along with other evidence that lawyers defending Kessler never wanted the public to see is coming out this week, including photos and analysis of blood splattered throughout the salon where the two women worked. Analysis found some of that blood was Cummings, but some was a match for Kessler.

More than 360 pages worth of documents were released Friday by the State Attorney's Office. In describing surveillance video of Kessler carrying two white trash bags to the dumpster behind Dick’s Wings after Tangles closed the last night Cummings was seen alive, the detective noted the two were of considerable weight. They noted that Kessler appeared to struggle to lift them into the bin. Kessler was also described as looking “tired and unsteady on her feet.”

Former FBI agent Toni Chrabot, who's now CEO of Risk Confidence Group, said the new evidence shows there was likely an altercation between Cummings and Kessler.

"To me, that's a huge indicator of a very violent event," Chrabot told News4Jax on Friday.

Kessler was arrested on an auto theft charge within days, but she wasn't charged with murder until a Nassau County grand jury indicted her in the death of the missing 34-year-old Nassau County woman even though her body has not been found.

Despite objections from the defense that it would taint the potential jury pool for this high-profile case, Judge James Daniel ordered the State Attorney's Office to release what is called discovery material in the case.

Images released Wednesday, Thursday and Friday and reviewed by the I-TEAM show evidence markers and a shoe in a wooded area behind Tangles Hair Salon in Yulee, where Cummings and Kessler both worked, and a chilling amount of blood around the salon: on walls, chairs, cabinets and in the sink drain.

There was also blood on a bleach bottle and a mop. A blacklight photo of the mop shows blood that showed up in mop strokes on the floor after crime scene investigators applied the chemical luminol.

"What the luminol shows is that there was blood that could have been, that was cleaned up," Chrabot said.

There's also a picture of a Walmart receipt for 30-gallon trash bags, an electric knife and a large bottle of ammonia. Kessler can also be seen inside a Nassau County Walmart through surveillance video the store released to detectives. Kessler can be seen purchasing multiple items in the self-checkout line and then leaving the store in her black Kia Soul.

Based on the evidence collected in the case, investigators are considering whether Kessler dismembered Cummings. 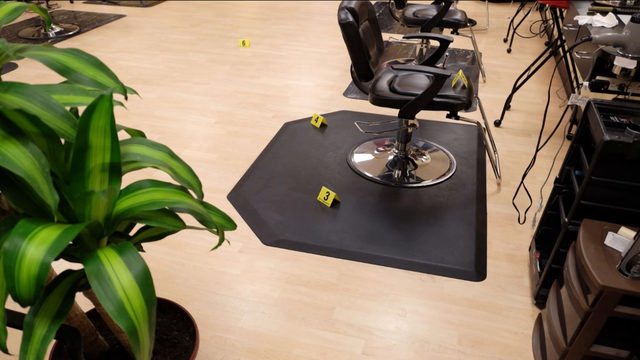 Among the information in 285 pages of investigative reports and search warrants released Thursday is that deputies found $1,600 in cash in Kessler's Kia Soul. In one evidence photo, it can be seen that the drawer below the cash register at Tangles had been ripped open.

When Kessler was arrested, deputies said she had several injuries on her hands, wrist, arms and thighs, and a patch of hair missing from her head. Investigators said she was also in possession of driver's licenses from five states in the name of Jennifer Sybert -- one of the 17 aliases police say Kessler has used while living in 14 states over the years.

“It's as if she took on all different kinds of identities and became a master of disguise. So you don’t know what is the underlying factor here, what is going on in her mind," Chrabot said. "But I think this is going to be shocking."

When interviewed after her arrest, Kessler appeared calm, saying she didn't like to keep documents and accounts in her name because she was scared her ex-fiance will find her.

“He has friends who are computer hackers," Kessler told a detective. "And he has hacked me and, quite frankly, I’m surprised I’m still alive."

Kessler also told the detective about how she considered changing her identity to protect herself, but she claimed it would be too hard.

Other documents released this week showed there was a confrontation between Kessler and Cummings on May 9 -- four days before the mother of three didn't show up to pick up her children. Another co-worker said Cummings told her she had a feeling Kessler wasn't who she said she was. Cummings added she was going to start digging into Kessler's background.

Kessler was arrested a few days after Cummings vanished, initially charged with stealing Cummings' SUV.  When prosecutors felt they had enough evidence against her, Kessler was indicted on a charge of first-degree murder.

Chrabot said the mountain of evidence is key for investigators building a timeline.

"Every piece of that will be an important piece of putting the story together," she said. "They will need a mountain of physical evidence because they don't have a body."

The judge had Kessler's attorneys indicate which specific pieces of evidence they objected to being released. The court records that drew no objections were released earlier this year, but this week, Daniel ruled individually on each of the defense's objections, overruling most of them.

Daniel noted “the case has garnered an exceptional amount of media attention. The overwhelming majority of media coverage, to date, has been factual in nature and not biased towards the defense.”

He said the material to be released “would not create unfair pretrial publicity in the overall community.”

Daniel also took note of all the social media postings related to the case, saying, “The social media activity by these individuals has not infected, and will not infect the community as a whole. Those commenting about the case on social media do not pose a serious and imminent threat to the administration of justice.”

Daniel is keeping under seal Kessler’s bank records and some reports and interviews that detail past incidents and romantic relationships, saying they “may very well be irrelevant and inadmissible at trial, as well as lay opinions about (Kessler's) mental health and stability.”

Kessler is being held in the Duval County jail and her next court date is April 18.

Cummings' SUV was found parked outside a Home Depot after she was reported missing by her family when she failed to show up to pick up her children from her ex-husband.

Kessler was arrested May 16, 2018, and charged with grand theft auto after investigators said they found surveillance video showing her getting out of Cummings' vehicle.

Kessler, who Nassau County Sheriff Bill Leeper said has lived in 33 cities in 14 states under 17 names since 1996, is being held without bond.

A weeklong search in June at a South Georgia landfill was prompted by surveillance video that authorities said showed Kessler appearing to put a white trash bag into a dumpster about the time of Cummings' disappearance.

After sifting through 6.6 million pounds of trash at the Chesser Island Landfill, the FBI and the Sheriff's Office announced that they had found several items of interest in Cummings' disappearance.