Violent crime up in Jacksonville despite social distancing

The meaning behind your strange coronavirus dreams

The plan is to turn the Riverwalk into a loop and tie in much of San Marco and, eventually, add a path to connect to a shared pedestrian and bike path the Florida Department of Transportation plans to build a share over the Fuller Warren Bridge to the Northbank Riverwalk.

In this plan, the Riverwalk wouldn't end at the Acosta Bridge, but extend to near Nemours Clinic on the south side of Baptist Medical Center in order to tie into the bridge walkway.

It will then connect to a walkway through redeveloped areas of San Marco.

"There are pieces of it that will be constructed as soon as next year, and then you continue implementation," said Jacksonville Councilwoman Lori Boyer. "We are very close to having all the missing pieces put together and, as one development after another has come online on the Southbank, we have been able to fill it in. So I think it will be a reality."

The path through San Marco would pass the new MD Anderson Cancer Center, through residential neighborhoods and return to the river at the new District property being developed next to the Duval County School Board building. 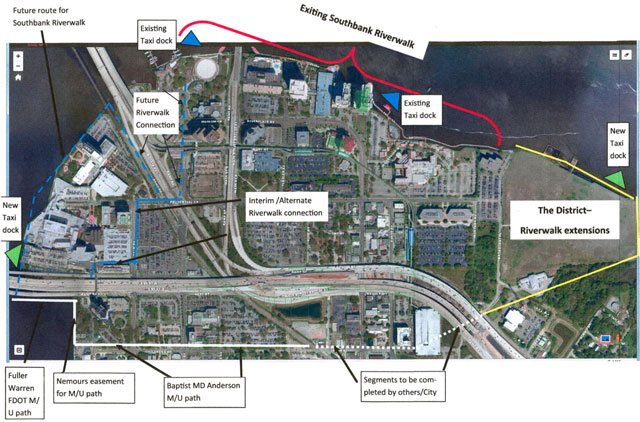 "That is a wonderful idea because we use this for running and it would expand our running around, which is a wonderful idea," Riverwalker user Ken Chamberlain said. "Now that they've changed and approved this, it is just wonderful. Much improved over the wooden pier that was here before."

Boyer said funding for the Riverwalk extension will come from development deals the city has already worked out. There will be some cost to the city, but officials are working on that.

Boyer hopes the entire project will be completed between  2019 and 2021.

The city told News4Jax Tuesday it will make temporary repairs to rotten wood and rusty nails on the portion of the Riverwalk near Friendship Fountain.

Authorities didn't say when the temporary repairs would be main or what would be done to make permanent improvements.