The lawyer representing Aiden Fucci, the teen accused of killing Tristyn Bailey, filed a motion Wednesday morning asking for a continuance of his murder trial and saying she is appealing the judge’s order for a six-member jury to the Fifth District Court of Appeal.

Pollen season kicks in this month

JACKSONVILLE, Fla. – As school districts across Florida develop new plans to better protect students from an active shooter, companies are creating new technology promising to do just that.

The I-TEAM just tested one of them, Shooter Detection Systems, which has been installed all across the United States and in Europe. The company's looking to build its presence in Florida following the school shooting in Parkland that prompted lawmakers to change school safety rules

Shooter Detection Systems, in partnership with IT companies Genetec and Lencore, went into development following the Sandy Hook Elementary School shooting in Newtown, Connecticut in 2012. 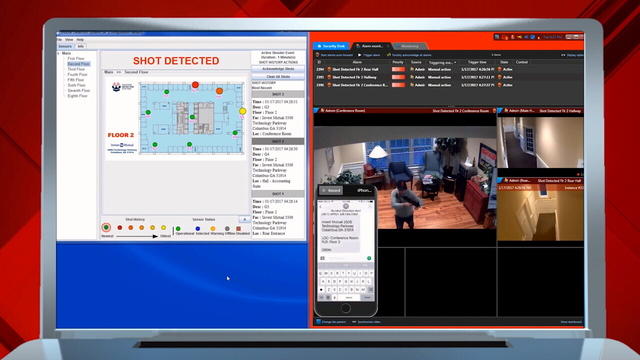 The technology is designed to detect gunfire immediately, stop an intruder faster and get law enforcement to the right location more quickly.

During installation, sensors are placed throughout a building. Each one is equipped with microphones to detect the sound of gunshots and infrared cameras to spot muzzle flash.

When a gunshot is detected, nearly instantly, the system sends an alert to security and police, notifying them of the exact room. Live cameras allow them to see what's happening in that location in real time.

"It is creating a bread crumb trail. So now, local law enforcement knows that is the first shot that went off," explained Kevin Lech, the CFO and VP of Operations for Shooter Detection Systems.

The system can also trap an intruder to help innocent victims get out safely.

Miller Electric Company in Jacksonville is working to install Shooter Detection Systems locally and throughout Florida in the hopes of saving lives.

"A system like this will help lessen the mass casualty event. Instead of dozens or perhaps scores of individuals as victims, maybe we are down to one or two," said Andy Bowman with Miller Electric Company.

Lech says the Shooter Detection Systems can not only be installed in schools, but other soft targets like businesses and churches, pointing to a recent study of where many active shooting occur.

According to the company, research of 160 active shooter scenarios over 13 years found:

"I think the first install is going to be new construction," said Bowman. "And the school board says let's get it in now when it is most cost-effective."

Clay County Sheriff Darryl Daniels recently tested out the technology at Miller Electric Company's office, and he says he would like to see this technology installed in soft targets in Clay County, like schools, hospitals and businesses.

"If a person is in an active shooter scenario, and they start moving through a building, we as responders can know where to set up and how to address that immediately." said Daniels.

But, he also knows finding the funding would be a challenge.

"You know everything comes at a cost. And the cost of safety sometimes has an expensive price tag to it," said Daniels.

This gunshot detection technology is similar to Shot Spotter installed around parts of Jacksonville. It's a series of microphones put in high-crime areas that alert police to shots as they're fired in outdoor areas.

The City of Jacksonville spent nearly half a million dollars to install the sensors in Northwest Jacksonville, which has successfully worked to alert police to gunfire -- even before a call is made to emergency dispatchers.